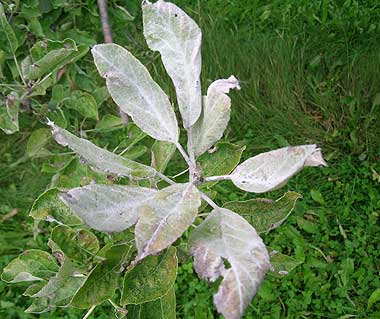 Later in the spring, as the fungus dries and is sloughed off, a network of russet appears on the infected surface of the fruit (Fig. 2). 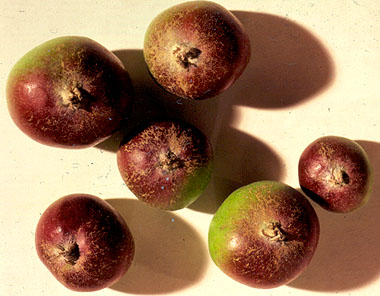 On apples the fungus overwinters in terminal buds and is most severe in a season following a series of mild winters. Severe winter temperatures can reduce mildew pressure by killing infected buds, which are more susceptible to winter injury than healthy buds. As infected buds open in the spring, powdery mildew spores (conidia) are released to initiate primary infections on blossoms, young leaves and fruit. Infections causing fruit russet can occur from about 3 weeks before bloom to 3 weeks after bloom. Additional conidia are produced on infected leaves and fruit which cause secondary infections. There are multiple generations per year, with trees susceptible as long as they are actively growing. Powdery mildew is favoured by moderate temperatures (10-15°) and high relative humidity.

1. Avoid overcrowding of trees and branches.

2. Prune out twigs with white fungus growth on the surface.

Early spring applications of fungicide (beginning no later than tight cluster) are necessary to prevent secondary spread of powdery mildew in susceptible apple varieties. Neglecting control early in the year will result in poor control during the season.

Dormant Monitoring: The number of mildew sprays required on bearing trees prior to blossom can be predicted by estimating the percentage of one-year old shoots showing white fungus on the bark surface during the dormant season. If more than 15% of one-year-old shoots have mildew, two pre-bloom sprays are required. Spray once prior to bloom for levels between 5 and 15%. Pre-bloom sprays may not be required if the mildew level is below 5%.

Fruit - Fungicide application at the pink stage is a critical timing to prevent fruit infection and subsequent fruit russeting.

Foliage - A single pink spray will not protect the foliage of susceptible varieties such as Honeycrisp, McIntosh, Granny Smith, Gala, Jonagold and Ginger Gold. Two pre-bloom sprays are needed for good control of powdery mildew where disease levels are high. Apply fungicides at 10-day intervals or as labels direct, from tight cluster until terminal growth ceases, to keep foliage free of mildew and to reduce carry-over to the next season. Control of foliage powdery mildew is particularly important in nurseries and on young trees. On more resistant varieties such as Red and Golden Delicious, damage from moderate amounts of mildew on terminal growth is relatively minor and does not warrant an extensive spray program.

There is apple scab resistance to Senator in most orchards of the central and north Okanagan. It is suspected that resistance to Nova is starting to develop in apple powdery mildew. Limit sprays of Nova and other group 3 fungicides to once or twice per season.