Rodents chew the bark on young trees, create extensive burrow systems that pose problems with equipment movement and worker safety, damage irrigation lines and in extreme situations, affect crop yields. The correct identification of the problem species is the first step in controlling populations. What may work for ground squirrel control will not be as effective against a vole invasion. Understanding biology and habitat of the target species will help with choosing the most effective control strategies.

The primary rodent pests in the BC Interior include voles, pocket gophers and ground squirrels. 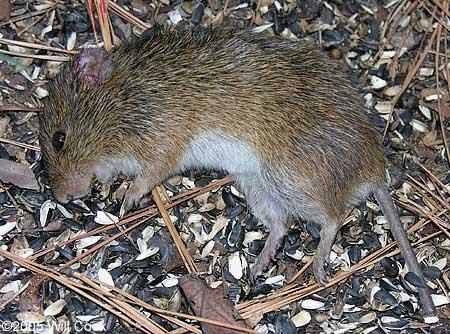 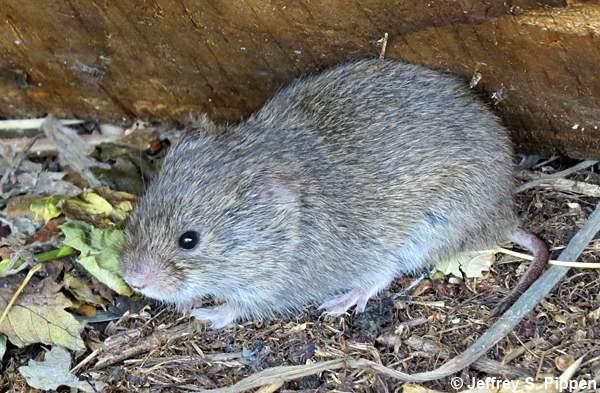 The meadow vole is about 14 to 17.5 cm long with small eyes and ears that barely extend beyond the fur. The tail is about 1/3 the length of the head and body. The tail, body and head are uniformly covered in a grizzled grey to grizzled brown fur.

The montane vole (mountain vole) closely resembles the meadow vole. It measures 13.5 to 16.5 cm long; however, unlike the meadow vole, the tail is less than 1/3 the length of the head and body. Another difference is the underside of the body is grey in the summer and white in winter.

Both species prefer a habitat with abundant ground cover. They usually establish a system of surface runways and underground tunnels. Voles begin feeding on fruit trees when cool weather reduces their summer food supply. Injury to trees can begin in late summer and continue through fall and winter. Complete girdling of the trunk or roots will kill the trees. Damage to roots is often worse than visible damage above the ground.

1.  Mow the cover crop at regular intervals throughout the summer and early fall and remove prunings, tall weeds and grasses to discourage voles from breeding within the orchards.

2.  Remove brush piles, and other woody debris that provides cover, adjacent to orchards to discourage voles from migrating into the orchards.

3.  Remove all vegetation at the base of trees with herbicides or by cultivation to discourage voles from feeding on the bark. However, retain vegetation where snow cover may be inadequate to protect trees from cold temperature change.

5.  Traps: The same snap-traps (kill-traps), as noted for pocket gophers, can be used for voles. You could also use live-traps and physically remove voles from site. Trapping is difficult to place due to lack of tunnels to target the vole.

6.  Bait: Recommended commercial vole rodenticides are formulated as solid bait (i.e. meal bait and pellets) which should only be placed in burrows or in weather-resistant, tamper-proof bait stations to prevent access to the products by children, pets, livestock and non-target wildlife. Bait stations will also protect the contents from moisture deterioration. For voles the best time to set out bait stations is just prior to the first snow fall. Check the bait stations regularly to monitor the disappearance of bait which will indicate if voles are still present. Construct bait stations from old fluming, metal or plastic pipe or pieces of wood (see schematic below), but make sure to secure them well to trellis post or partially bury under ground in tunnel (depending what rodent you are targeting). 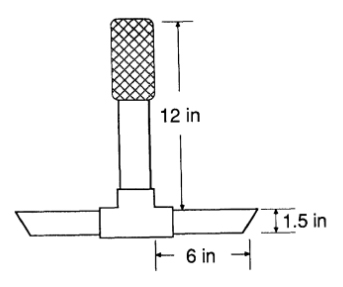 Place bait stations in areas where voles were evident during the summer or are likely to be found during the winter (e.g. near trees, fences and brush piles). It is important to alternate use of rodenticide active ingredients to prevent rodents from developing bait shyness. (See product choices in Rodenticides) 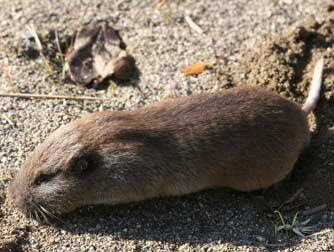 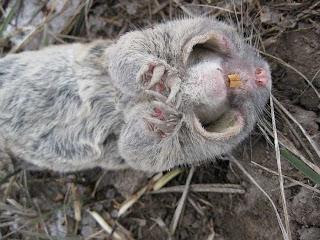 The northern pocket gopher (often mistakenly called a mole) is a burrowing rodent about 17.5 to 22 cm long, which prefers to be below ground and will rarely be seen on the surface. The head is broad with small eyes; its short ears barely extend beyond the fur. The body is narrow and thinly covered in brownish-grey fur except for the lighter underside with some white on the throat, chin and chest. The hairless tail is about half the length of the body. The northern pocket gopher has noticeable sharply pointed, curved claws on its feet with which it digs its underground burrows throughout the year. As it burrows it pushes up small fan-shaped mounds of excavated soil with loose soil plugging the opening. Pocket gophers can cause severe damage to fruit trees by feeding on roots, often killing young trees. 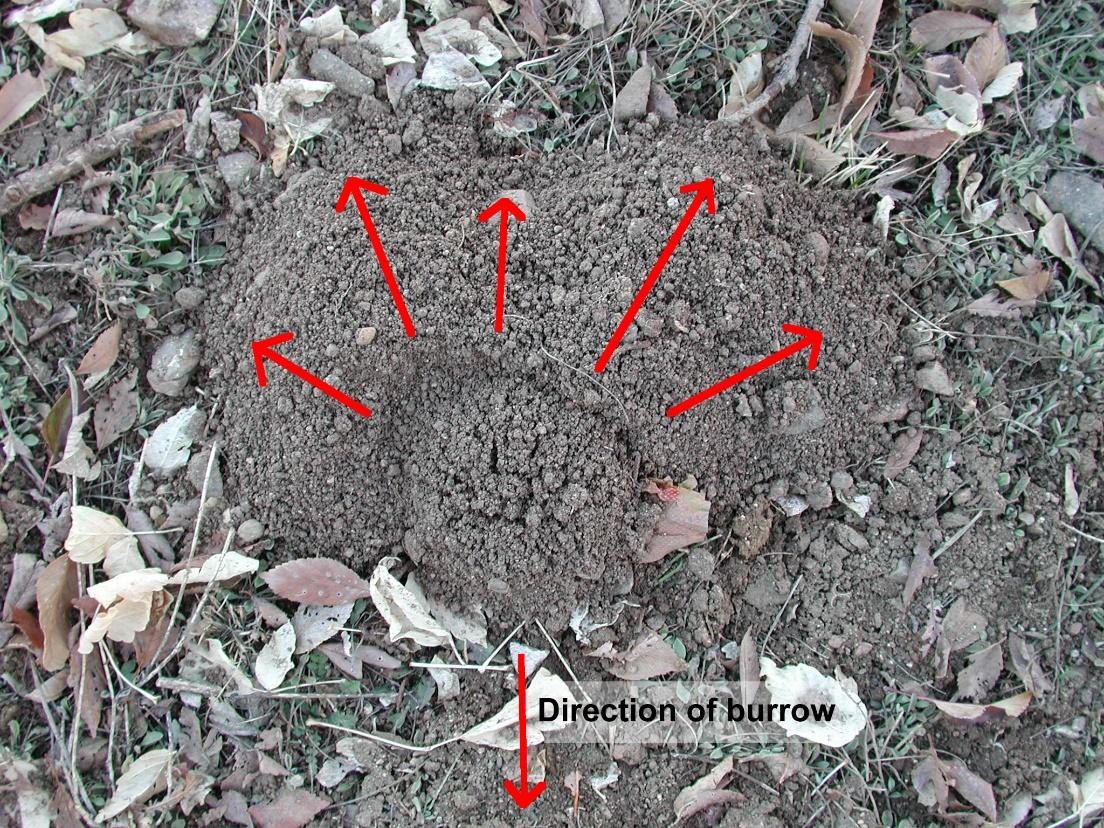 To avoid pocket gopher damage to replanted trees, apply one or more of the following control methods to rid the property of the pest before or at the time of replanting. Closely monitor for activity by checking for fresh push-ups, especially along borders adjacent to infested lands.

Use a hand-probe when infestation (a hollow probe with opening at bottom to drop bait down into a burrow) is light or as a cleanup operation between burrow-builder treatments. Probe opposite and about 30 cm from the V-shaped indentation of the side of a mound. The probe will drop about 5 - 10 cm when a burrow has been located. Place the required amount of rodenticide bait in the burrow as per label instructions. Make 2-3 bait placements per burrow. Leave probe hole open after baiting. (See product choices in Rodenticides)

When using first-generation anti-coagulants such as chlorophacinone (Rozol), re-bait every 24-48 hours; these products require multiple feedings for a lethal dose. Maintain a constant supply of bait in the burrow system for as long as there is pocket gopher activity. Do not apply bait on the soil surface. Bury dead animals and spilled bait found on the soil surface immediately.

This practice is more common in larger open areas such as hay fields or used treating orchard margins to prevent or slow down the invasion from near by areas. To build a proper burrow the soil must be damp, and the Burrow Builder must be clean before use. Using a broomstick or iron bar, probe gopher runways to determine their depth. Set the machine to the same depth. Make artificial runways 7 m to 10 m apart encompassing the total infested area and then cross the ends. Apply a rodenticide bait as per label instructions. Immediately after application, use a harrow or similar implement to level mounds in order to monitor for new mounds. Check the treated area 10 days after application for new mounds. Any remaining active mounds should be treated again using a hand probe or burrow builder to achieve maximum control. Repeat applications may be necessary. A detailed description on using burrow builders for pocket gopher control is posted at http://extensionpublications.unl.edu/assets/pdf/g2035.pdf.

Use snap design pocket gopher traps (e.g. Guardian, Victor, Woodstream, or Black Hole) where infestations are light or in areas where poisons cannot be used. Begin trapping in the spring when gophers are most active. It is important to correctly place the tunnel traps in main tunnels. Open the tunnel using a hand trowel or other small shovel and place two traps facing in opposite directions to intercept gophers in both directions. Use wire or light chain to secure the trap to a stake to allow safe and easy removal of the carcass or trap. Make sure the opening is sealed to prevent light or air currents entering the tunnel. This is very important so that gophers do not block tunnel or trap with soil as they attempt to close off burrow. Check the trap once or twice daily. If no gophers are trapped after 3-4 days, relocate to another main tunnel. Always be vigilant for gophers invading from bordering properties and act promptly to prevent establishment.

Open the burrow and place the recommended amount of bait deep in each opened burrow in such a manner that the bait is not visible from the surface. Close the burrow without burying or covering the bait and repeat treatment as needed. When baiting for pocket gophers, if the burrow is not closed after placing bait, pocket gophers may kick the bait back out onto the surface when closing the entrance, which can put pets and non-target wildlife at risk. (When baiting for ground squirrels, do the opposite and leave the entrance open as ground squirrels may kick the bait back out while trying to reopen the entrance.)

The Columbian ground squirrel is a small rodent that burrows in the soil to nest and hibernate, creating mounds of soil next to the burrow opening. They prefer to burrow in banks, hillsides and sloping round and open areas free of dense tree cover. They avoid soils with a high-water table. 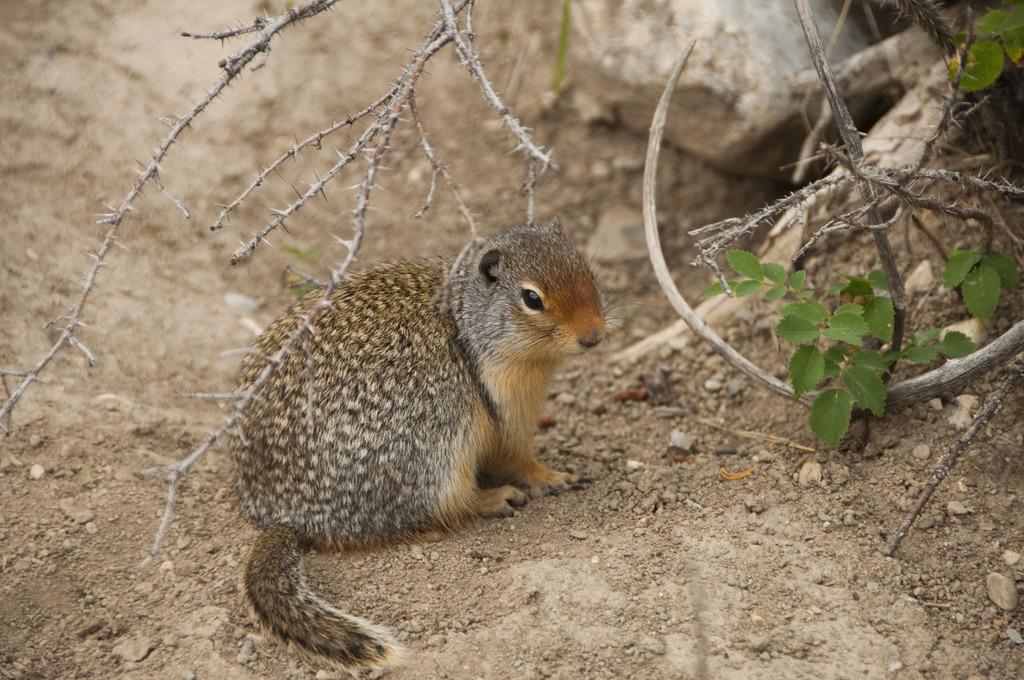 Adults weigh about 0.4 kg with a body length of 25-30 cm and have a 7.5-12.5 cm long somewhat bushy tail. Reddish-brown fur covers the nose, forelegs and hindquarters, and a mixture of gray and brown fur covers the back and tops of the legs. These rodents are often seen above ground during the day ‘standing’ on their back legs.

Columbia ground squirrels emerge from hibernation in March and April, the males emerging 1-2 weeks earlier than the females. Females mate soon after emerging and produce a single litter of four to five young which do not emerge to feed on nearby host plants for about 4 weeks. They are active until August when they line their nests below the frost line with grass in which to hibernate.

They feed on a wide variety of vegetation, preferring the most succulent species available over the summer. Most of their water is obtained from all parts of plants. They do not store food but must consume enough to build up fat reserves to get them through their winter hibernation (usually 6-7 months each year).

Ground squirrels damage fruit trees by gnawing bark, girdling trunks, eating twigs and leaves, and burrowing around roots. Burrows around the tree base can damage and dry out roots, and make the trees more susceptible to toppling in high wind gusts. Their dirt mounds can make it difficult to mow and can damage equipment.

Ground squirrels are fed upon by many predators (coyotes, fox, weasels, owls, hawks, eagles, badgers, skunks and snakes) which can help to reduce damage along with other management tactics.

When hand-baiting in ground squirrel burrows, leave the entrance open as ground squirrels may kick the bait back out while trying re-open the entrance. When using first-generation anti-coagulants such as chlorophacinone (Rozol, Ground Force), re-bait every 24-48 hours; these products require multiple feedings for a lethal dose. Maintain an uninterrupted supply of rodenticide for 3 weeks or until no further signs of damage or burrow hills are noticed. Remove and bury any carcasses which are found above ground.

The following active ingredients are registered for control of voles and other rodents. Examples of product trade names are listed in the table at the end of this chapter. Before selecting a rodenticide, check the label to ensure the target rodent is on the label as many rodenticides are registered only for mice and rat control. Always dispose of dead rodents in garbage or by burying.

1.  Chlorophacinone is a multiple-dose anticoagulant rodenticide available as paraffinized pellet baits for control of voles, mice, Norway and roof rats, northern pocket gopher and ground squirrels, depending on the product. Apply a ready-to-use 0.005% bait product in recommended weather-proof, tamper-resistant stations or directly into burrows following label instructions. This rodenticide requires multiple doses to be lethal; rebait every 24-48 hours.

2. Diphacinone is a multiple-dose anti-coagulant rodenticide available in paraffinized ready-to-use 0.005% pelletized baits for control of voles or ground squirrels depending on product. Several products are available for control of rats and mice only. The bait is placed in burrows or in bait stations, depending on product. Read and follow label directions. This rodenticide requires multiple doses to be lethal; rebait every 24-48 hours

Questions, comments, or concerns can be emailed to info@bcfga.com.