There are two identified species of mealybugs that attack tree fruits in the Southern Interior - the apple mealybug and the grape mealybug. Grape mealybug has been present for many years on grapes, but has been found on apple. It is a major pest of pears in Washington State.

Apple mealybug is the vector (transmits) of the virus that causes little cherry disease in sweet cherry. Read the description of Little Cherry Disease for information on symptoms of infection.  High populations of both species can produce honeydew which drips onto host fruit and causes russet and growth of black sooty mold.

Life stages of both species of mealybugs are very similar in appearance.

Adult - Female is wingless but mobile, with an oval flattened body up to 5 mm long fringed with short waxy filaments (Fig. 1). 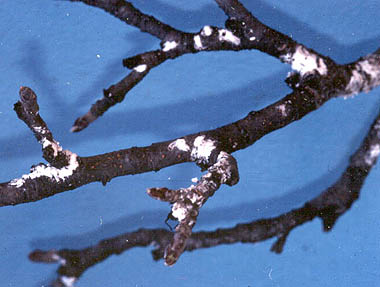 Female grape mealybug has four long waxy filaments extending the end of the  body (Fig. 2) which are missing on the female apple mealybug; both appear as small white powdery patches in bark crevices, pruning scars, and in crotches of branches. Adult males are winged and very small. 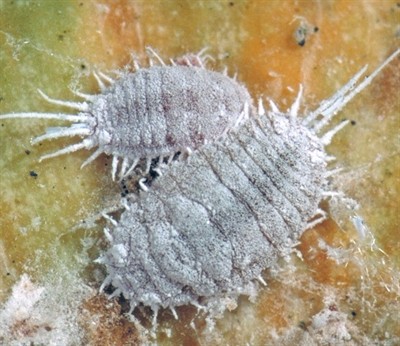 The apple mealybug overwinters as nymphs which merge to feed on host leaves before maturing in mid-summer. These adults produce the overwintering nymphs. It has only one generation per year. The grape mealybug also overwinters as nymphs that emerge the followimg spring to feed on host leaves before changing into adults about mid-summer. A second generation of adults apears in late fall which produces the overwintering nymphs.

To detect crawlers in the spring (both species) and grape mealy bug nymphs in late summer, wrap two-sided sticky tape around a smooth part of twigs where adults or  damage was noted last season. Replace the tape every 3-4 days and examine for the small yellow to brownish crawlers using a hand lens or magnifying glass. Use this technique to properly time sprays against crawlers which are the most susceptible stage for chemical control.

To detect mealybug infestations during the summer, visually examine the trees for presence of honeydew and/or sooty mold on leaves and branches, and for adults hiding in bark crevices, crotches and other protected sites on the trees. Mark infested trees for spot treatment and for monitoring crawlers.

Older standard trees are most susceptible to infestations because they provide more hiding places for all stages and less exposure to sprays if not properly pruned to open up the canopies. Mealybugs prefer to feed on tender new growth, so sucker removal before the end of June will aid in reducing the risk of damaging population levels.

Apply Movento after petal fall is effective against mealybug crawlers in other stone fruits.

In apple and pear orchards, pre-bloom applications of diazinon against aphids and leafrollers will also control any crawlers present. Apply Movento after petal fall to control crawlers. Make sure honey bees are no longer foraging.